skip to main | skip to sidebar

I have a really long easter holiday, as well as a long winter holiday.
Aaaand, I wanna go to the mountains. Anybody care to join me?
Lagt inn av Eirik A jobber kl. 14:56 Ingen kommentarer:

It`s been some months now since I was abroad, and I really miss it. The exitement, the long hours, the tasty food! Ah, and I look so much forward to see south America. It`ll be prrretty good!
And, not at least, I really look forward to seing the guys from Hald again. I`ve gotta say, life in Mandal isn`t the same without them!

Okey...
I`m EXTREMELY restless.
Infield is over, det last people just walked out the door. I`m sitting behind, alone, with all the impressions and thoughts. The last week has been amazing!
To feel so bad now, after the students have left, scares me. Just imagine how it`s going to be when they leave for their home countries to the summer. haff..

In other words.. Infield, as an ettåring, not as participant, has been GREAT :D
In one week, I`ll go to Peru.. Imagine how that`s going to be!

Btw, Jack Johnson - Upside down, comes from my speakers.. it prrrretty nice!!
The sun`s shining in Mandal, and there - 15 degrees :D

The last 24 hours have been of the most special, challenging, strange, confuseing and interessting time of my life..

Infield for the south students have started with a boom. Last night we saw a movie called: Live, and Become. (For those who don`t know, it is from this movie Hald International Senter has gotten its slogan; Go-Learn-Become).
Agnar introdused the movie as handling about poverty, racism, identity and religion. He was absolutely right. Without any doubt, I would say that this is deffinetily one of the BEST films I have ever seen.

Today, Harald is having teaching about poverty. In of the sessions, he showed a speach which Bono, the lead singer in U2, gave in Washington, under the invitation by former president, George W Bush. Bono talks about Charity and Justice... What are they, and can they iradicate poverty?!
After the speach, the south students here at Hald started reflecting and discussing around the terms: Charity, Justice, Peace, Poverty...
Sitting on the sideline, with the impression from yesterdays movie, still hanging over my head, twisting, turning and molding around in my head, and getting the opportunity to listen to what the students had to say.. I`ve got to say, I was blown away.
Charity can not iradicate poverty, only justice can. But justice can not be fullfilled withouth peace. But what is Charity? What is justice? WHAT IS POVERTY?
Some really big questions were disgussed, few answers were given, more questions raised, leaving me confused, impressed, inspired and much more..

If it were up to me.. Each and every leader and journalist in Norway, would sit on the sideline, hearing that discussion, so that they could see that when it comes to poverty, I believe that there is no one that are more capable of express and discuss the true nature of poverty, than those who have seen it, experienced it, grown up, surrounded by it..
But then.. What is poverty?? 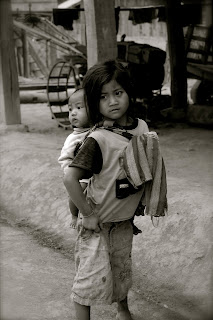 Eirik A jobber
Hola. This is probably my favourite word, next to; "der ja" (don't ask) This year I work as ettåring at Hald Internasjonale Senter. I was a student there last year, and through the school I exchanged 6 months to Laos. There I got a new name: Sing. There of the name of my blogg. Sings utrolige reise, which bares the meaning of my travell through life, as Sing/Eirik. I live to serve the God I believe in, and through that faith, I live to serve the people around me. God bless, no stress.